I have no idea what happened to winter.

All I know is that, after what felt like a decade of continuous rain, all of a sudden there are flimsy  dresses in the streets – it is England after all and people get carried away with a bit if sunshine.

With this year’s early onset of spring came an array of fresh vegetables we hadn’t seen for a while, and a craving for all things fresh. True, radishes are still looking a bit anaemic, and the stars of the show – strawberries, sweetcorn, peaches – haven’t shown up yet. Still, with the glorious sunshiny weekend we had, it was out with the melted cheese and in with the lemonade  and salads.

Craving to cook something fresh and summery, I went for a stroll through Lewisham market in search of inspiration for dinner. Lewisham market is a curious place. Compared to its more genteel farmers’ markets neighbours, it could be described as ‘real’. It’s a great place to fill your fridge for the week for a fiver. As long as you’re planning to do some serious cooking. Some of the typical fare on offer include: a pound for 900 spring onions, or a bucket load of lemons, or approximately a lifetime’s supply of coriander. Don’t ask me how it’s all so incredibly cheap, but you do end up with some meal planning challenges. I tend to go with one of my neighbours, and we split the massive amounts of vegetables, or we’ll end up eating onion soup for a fortnight.

On Saturday, I went a bit overboard on the aubergine, which really is a lovely problem to have. There isn’t a single variation of this most versatile vegetable that I don’t absolutely love. Parmiggiana,  caponata, battered aubergine, I’ll lap it all up. The undisputed king of aubergine dishes, for me, has to be baba ganoush – the smoked aubergine cream also known as one of the top 10 best dishes in the planet. So, with 2 and a half tons of aubergines on my hands, I set to roast those babies and stock up on dip.

Baba ganoush is so simple to make, but it can be a bit off-putting because it looks fiddly and messy. It doesn’t have to be. Just have a very basic production line and you’ll have smokey, irresistible aubergine that goes wonderfully well with virtually every food – and a relatively tidy kitchen in the process. All you need is a few aubergines, some tahini – or sesame seed paste, widely available from middle eastern food shops or most supermarkets – , garlic, lemons and olive oil. As for herbs and spices, I’ve experimented a lot, and found I like to add more parsley than you’d normally see in original recipes, which explains why my baba ganoush looks a bit green. I also add a tiny pinch of cumin for the smokiness, but I suspect if you roast your aubergines on a barbecue (which I don’t – please refer to paragraph one: living in London), you wouldn’t need the cumin.

For a quick dinner, you can use the 30 minutes while the aubergines are in the oven to get on with the rest of the meal. I used my Lewisham market bounty to make some roast cauliflower salad with lots of raddishes and a few of the 900 spring onions. Some grilled halloumi cheese, a bit of hummus to pair up with the baba ganoush, and we were set for spring!

Johnny the cat is quite partial to a bit of babaganoush 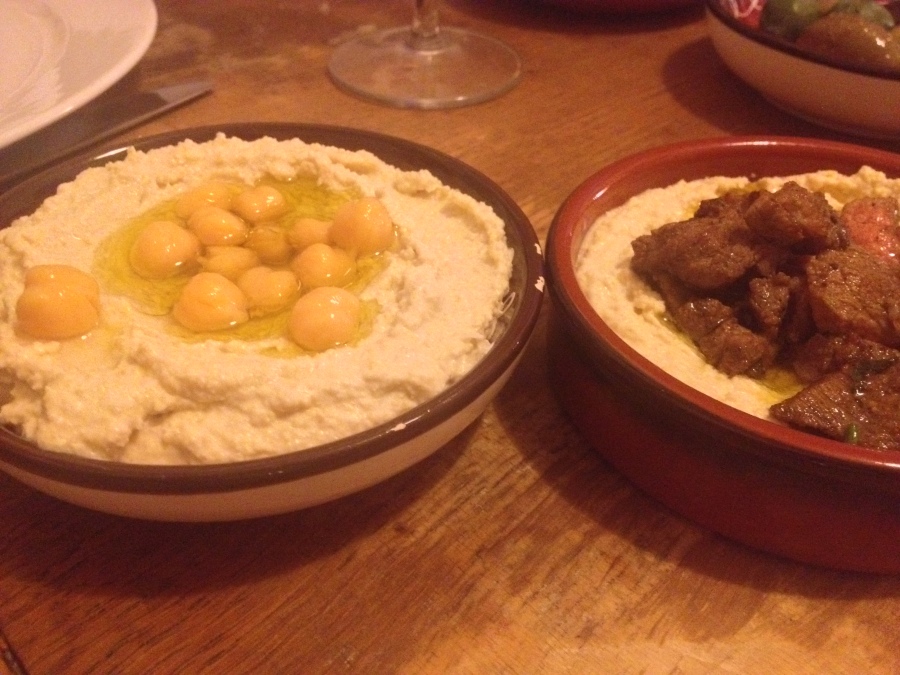 His and hers hummus: mine has marinated neck of lamb on it. 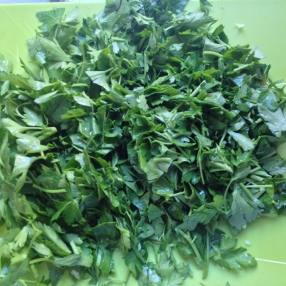 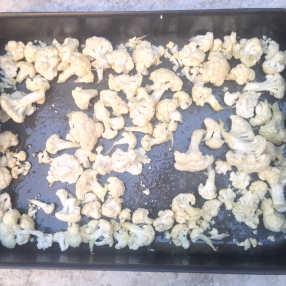 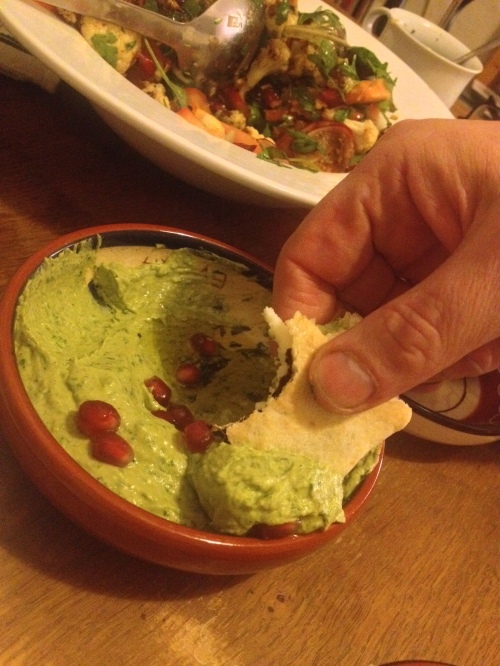 This recipe uses quite a lot of parsley and the dip ends up pretty green. Use a bit less for a more authentic looking brownish baba ganoush. As for the garlic, I use a small one per large aubergine. It’s safer to start with 1 or less, and add more if needed. Too much garlic will ruin the aubergine taste. If you don’t have a gas fire, I think the only worthy alternative is a barbecue. Or a wood fired oven if you’re lucky enough to have one. Taking the aubergines straight into the oven without smoking them first, in my opinion, compromises the final taste too much and it’s not worth making it.