Children’s parties can be loud things. The ones I attended when I was growing up in Brazil were insane. Brazilians have a very sweet tooth. Very. We don’t go much for the hint, or suggestion of sugar in our desserts. We go the full hog.  Back in the 70s, with not a lot of thought given to ADD or E numbers, there was nothing standing between a birthday table covered in glucose and a pack of 7 year olds. The result was a bunch of crazed kids buzzing around in a collective sugar rush for hours, until the first inevitable crash came knocking down everyone else like dominoes. And we all went home sobbing and a bit bruised, ready for the next birthday do.

One of the many treats I stuffed my face with in those parties was Maria-Mole. They’re not quite marshmallows, since there are no eggs in them, but it’s a similar texture, a little bit lighter, and covered in coconut. If you’re thinking of turkish delight, forget it. These are much more delicate, a bit more bouncy, and not  chewy or sticky. Before you know it, an entire tray of maria mole can go in 2 minutes. They’re the very definition of moreish.

In the true spirit of the 70s, you’ll find maria-mole in various pink colouring shades, or coated in a thin film of chocolate, or sometimes sprinkled with toasted peanuts. I suspect the  ones I had as a kid were out of a pre-mixed packet, with synthetic coconut flavouring. I like the white, unadulterated coconut version, and made my own here, dispensing with the help of Dr Oetker. You could use fresh coconut milk if you’re lucky enough to have them handy. I used coconut milk out of a tin. 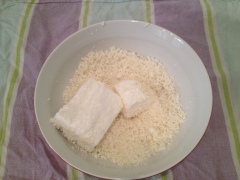 And it worked a treat. Imagine biting into a coconut cloud. Made like this, maria-mole are definitely not a sickly children’s treat, and would make a very proud and grown-up appearance at any table. I served mine with coffee after Sunday lunch, and I wish I had some kids to blame for the mysterious disappearance of all maria-mole by the time I went to bed. With a slight ringing in my ears.