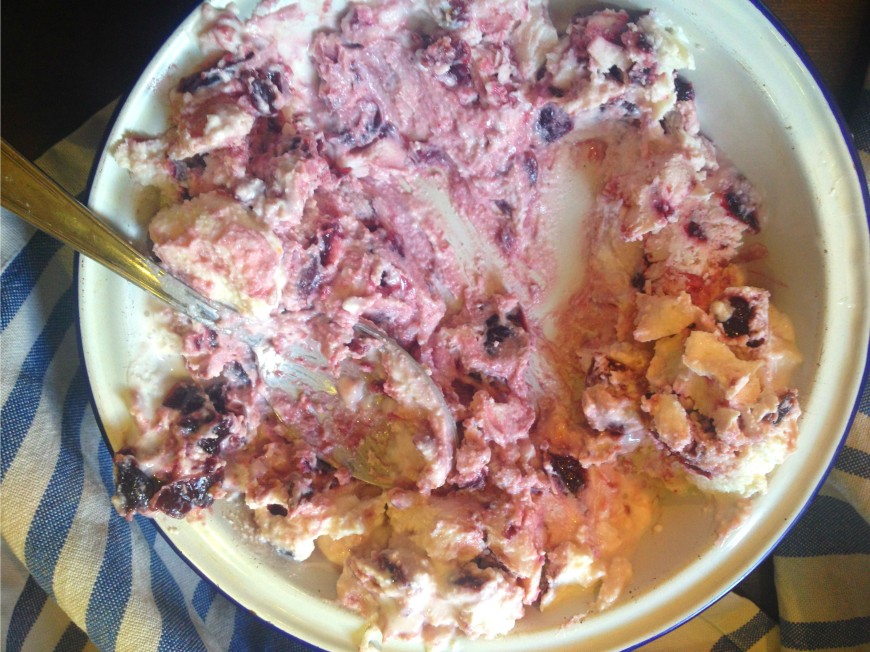 We have little shops selling fresh ricotta, lovely neighbours with generous cherry trees, and we are a safe distance away from chaotic central London. These are some of the many reasons why South East London rocks.

Like most people living in London for more than 5 minutes, I have it as a rule to avoid Oxford Street and its noisy crowds, dreadful traffic, visual pollution and generally irritating surroundings. During the Summer months, that rule becomes an amber alert, taking into consideration the tourist population, and my pathological lack of patience with slow pedestrians hogging the pavement. Last Saturday, I had to make an exception for a very good reason: a new Kitchenaid! My mum decided she wanted to buy me one, and as the good daughter that I am, I gratefully accepted it. Selfridges had a sale on, and seemed to offer the best price, and so I headed to the more salubrious end of Oxford Street to see those babies in person and be sure to pick the right colour. Of course I had forgotten it was Pride Parade day, the traffic was twice as bad, half of Oxford street was closed off even for pedestrians, and it took me two hot, sweaty, sweary, nervy hours to emerge at the other end and smell the sweet air of Selfridges. Feeling immediately soothed by the kitchen department, I decided I could still do with a glass of something and some slices of San Danielle ham, and another glass of something else … well, before I knew it, I was cutting it short to make it back for the Brazil match.

Which is why, in my rush, I nearly missed the 1950s moment happening right on my doorstep as I rushed back home (through a much smarter and faster route, caring a bit less anyway after my hefty aperetif session).

Who doesn’t love a lemonade stall sort of enterprise? A bunch of kids selling the produce of their garden cherry tree, a pound a bag. Their mums were overseeing the operations, chatting away to neighbours. Total food miles: zero.

I quickly started on a bag, but had to stop myself choking on a pit, as I screamed and pleaded with Brazil to get a move on as we hung to the world cup by the skin of our teeth. 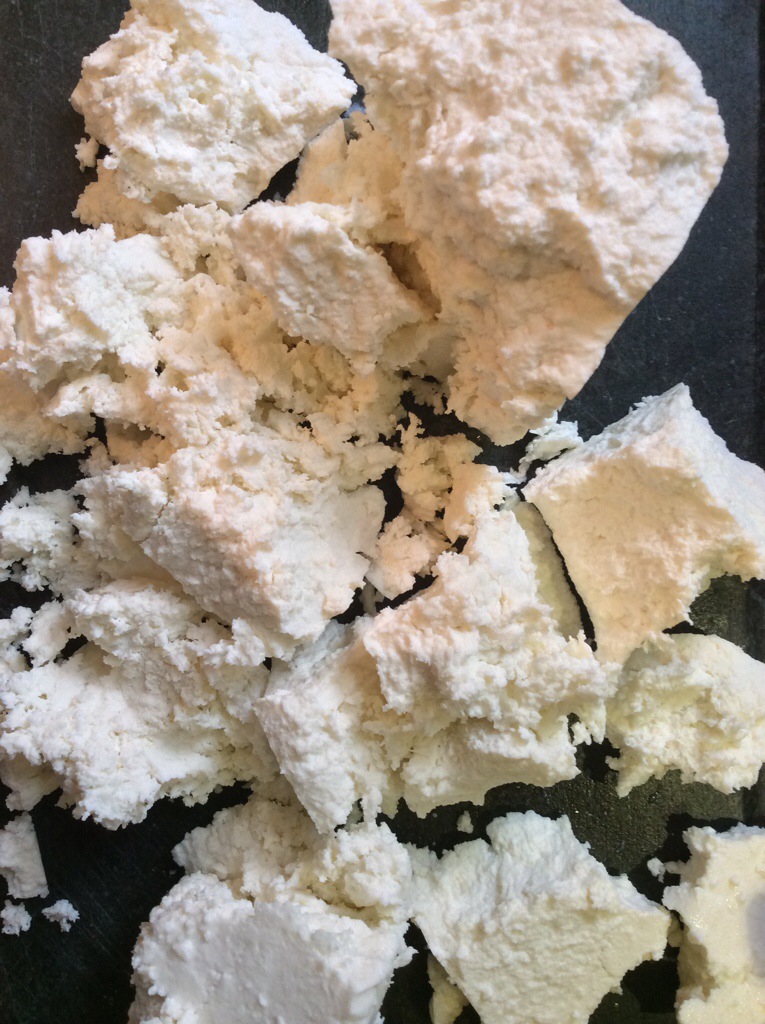 Next day, my cherry project took shape as I was buying some ricotta for dinner. I could eat ricotta for days on end, and the same goes for Greek yogurt. I was looking at both of them in the shop, and wondered what frozen yogurt would taste like if I mixed some ricotta into it. And than added a ripple of cherry jam. 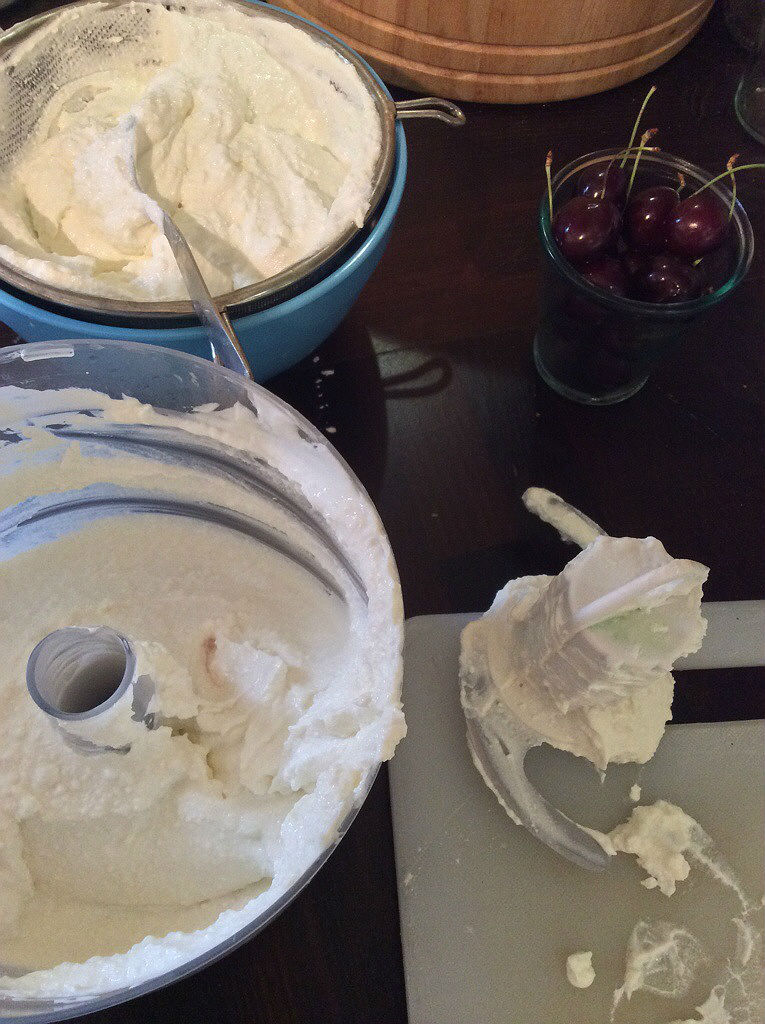 Let me tell you what happens: you end up with creamy, rich frozen yogurt,  with juicy bits of thick sticky cherry running through it. I found some creme de cassis and added to the cherry jam. I’m not entirely sure how child friendly this makes my frozen yogurt, but I took some back to the cherry mums, and they seem happy enough with it.

Three cheers to Catford and our cherry trees! 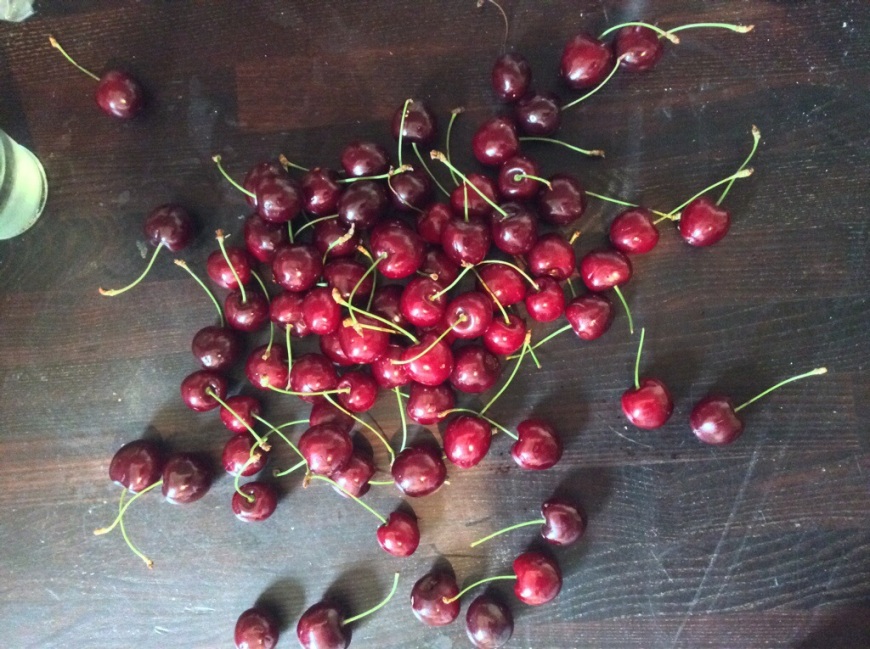 Cherries will forever taste foreign and northern-hemisphery to me. As for frozen yogurt, they may be a bit 90s, but I never got over them. What’s not to like? Fatty yogurt, turned into ice cream? The creme de cassis completes the nostalgic 90s theme.

For the cherry jam:

For the ice cream:

Make the jam:
Pit and roughly chop the cherries.
In a heavy saucepan, add the cherries and the rest of the ingrdients, bring it to a boil, and let it cook in medium heat for about 30 minutes until you have a thickish jam. Let it cool completely.

Make the frozen yogurt:
In a blender, blitz all the ingredients until smooth.
Press the yogurt – ricotta mix through a sieve so it’s not too bitty.
If you have an ice cream maker, follow the manufacturer’s instructions from here.
I don’t have one (mother?), and here’s what I’ve done:
Place the mixture into a non metallic container and take it, uncovered, to the freezer. Leave it an hour and mix it with a fork, making sure there are no crystallised bits. Mix it again an hour later. Wait one more hour, and this time add the cooled jam to it and mix it as much or as little as you like. I made mine reasonably pink, but still left it a bit streaky. Leave it in the freezer for another hour, and it’s ready to serve. If you leave it overnight, remove it from the freezer about 30 minutes before serving. It should be creamy, but not melting.