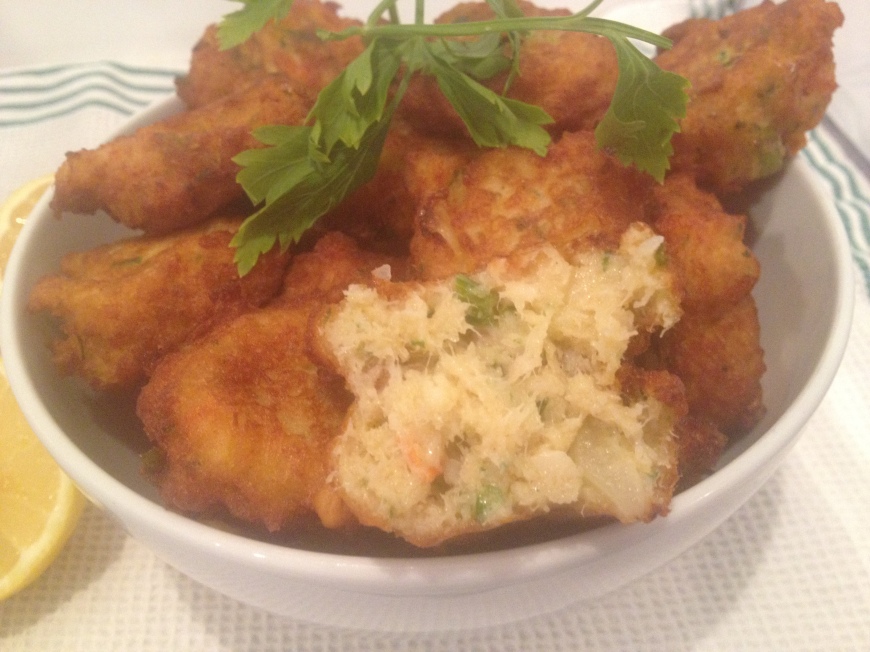 What to do with leftover fish? The way my freezer is going, it’s best not to add to its overpopulation problem. Since I seem to have gone all Latina with the cooking lately, I decided to try my hand at these fish cakes I once lusted after for an entire summer.

A long time ago, along with a then inseparable friend, we took a bus to the Farol de Santa Marta beach in the South of Brazil and spent the summer holidays there. Rock’n roll that we were in our early 20s, we took: a pile of books, very little money, and the capacity to talk for hours and hours on end. I suspect that place is still quite remote today, but 20 years ago, and before mobile phones or the internet, we really were in the middle of nowhere. We spent some of the very little money to rent a little fisherman shack, which we thought was ever so delightful. It was, at least until the day it rained, and then it became delightfully flooded. And so we spent the weeks reading, walking on the beach, talking and laughing incessantly, I’m not quite sure at what. To this day, we hold the irritating habit of bursting into inexplicable laughter when we’re together. 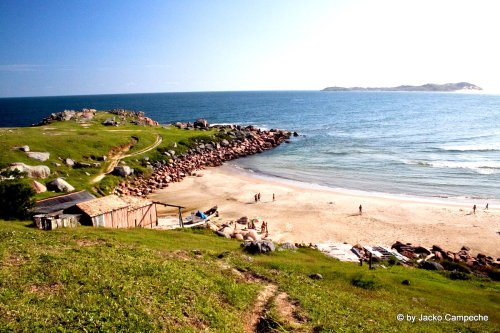 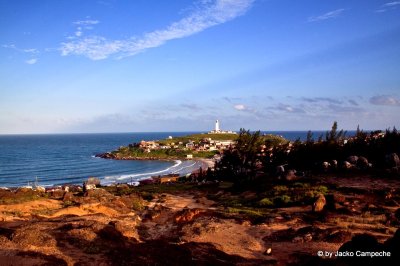 The lighthouse at Santa Marta
http://jackocampeche.blogspot.com

With the very little money, and the sad obsession of staying hot in those bikinis, we also didn’t eat a lot, cooking most meals at home. But every few days we’d treat ourselves to one of the local ‘restaurants’. (I’d also treat myself to the fantastic caramelised coconut sweets I soon found out about. Maybe she was a fairy or a vision, but there was this lady I would see sometimes in my early morning walk on the hill behind our shack, with a basket loaded with the little beauties. That lady made a lot of money that summer.) Now, Santa Marta is a fisherman’s village, and a surfers/hippie paradise. What we, with our students budgets and our dieters’ goggles on thought of as Michelin star was in reality someone’s front room, serving a one dish menu of rice, beans, toasted manioc flour, salad, and a choice of grilled fish or fish cakes. For what must have been about 50p. And those fish cakes became our nirvana. Our dream. A happy place in my mind to go back to in moments of stress. They were packed with flaky fish and parsley, with just a bit of crunch on the outside, and light and airy when you bit into them. So very tasty and moist. Apart from the famous and wonderful Portuguese cod cakes, I never had anything like that. 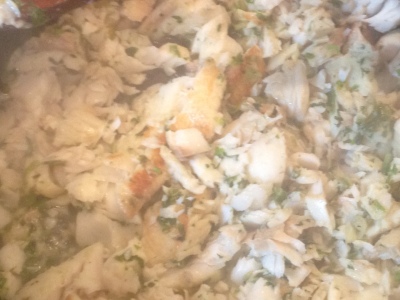 We both grew up. We remain solid friends, even living an ocean apart. We revert to giggly idiots and still never stop talking for one second when we meet. I like to think our palates and pockets evolved a bit since then. But the taste of that fish cake was no illusion. Just thinking of it, I want to go back to the shack and order a whole wheelbarrow of the things. 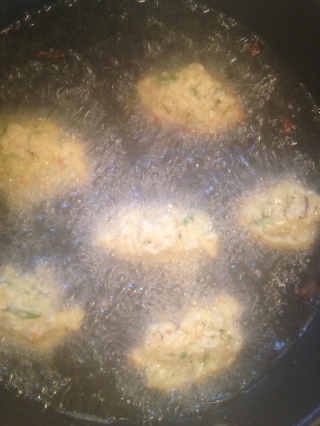 With my leftover tilapia fish, I made my own version of them, from memory. It was one of those leftover everything numbers again: fish, onions, parsley, spring onions, green peppers, coconut milk, and 2 ingredients I don’t believe should ever be used parsimoniously: ginger and coriander. By the armful. I marinated the fish in the herbs for only a little while, then fried them in a little olive oil – instead of boiling them as in some fish cakes recipes I came across. The coconut milk just adds a hint of sweetness and keep the cakes moist, and is not overpowering at all. Because I’m going through a chickpea flour phase, I used some of it mixed with plain wheat flour, hoping to achieve a bit of depht, but fearful it would end up with a nutty rather than fresh taste. It didn’t. As soon as I tried the first batch, I knew I was onto a winner. And I kept frying. And frying. Boy, there were a lot of cakes! So a couple of neighbours were treated to bowls of free dinner last night. And this morning I had one of them at my doorstep, notebook on hand, asking for the recipe! Here it is: