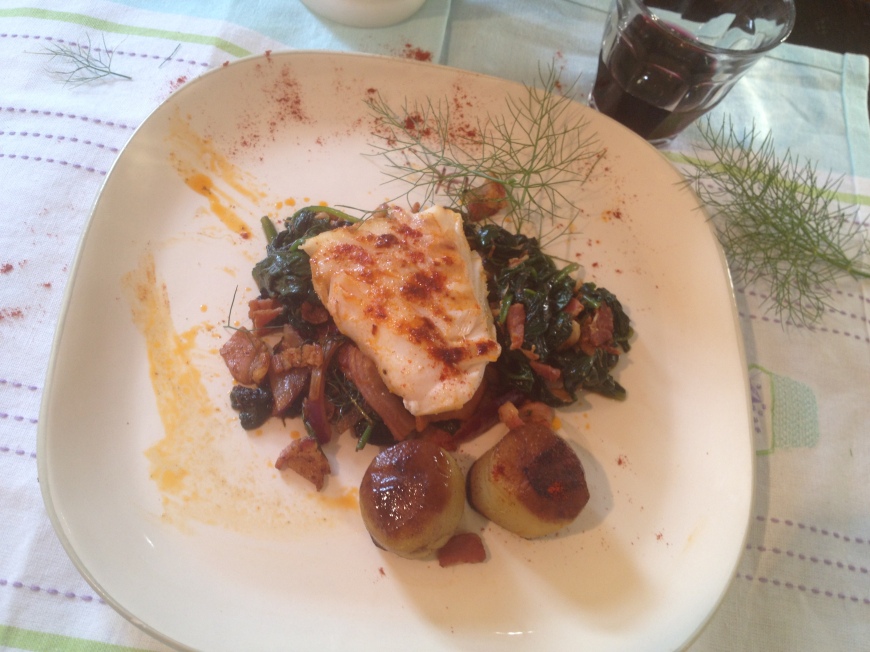 London is one giant barbecue at the moment. As part of the nationwide effort to squeeze every last drop out of summer, checkered picnic tablecloths cover every available patch of grass, and the permanent aroma of grilled meat permeates the air like a thick Victorian fog finding its way through the pores and crevices of the city.

On my commute back from work one evening last week, I looked like a cartoon character dreamily following the hypnotic t-bone shaped smell of deliciousness. It wasn’t going to be a salad dinner.

Midweek barbecues can be a hassle, though. Especially if your dining companion is vegetarian. What could be a matter of firing up the grill and throwing a couple of sausages on it becomes a ritual a bit like this: venture into the cellar and dust off the portable barbecue for the non-meat items; fetch some halloumi from the Turkish shop; think up a combination of peppers, onions and various other vegetables with simultaneous cooking time that can be stuffed into the same skewer; agonise at the supermarket over whether it is acceptable to buy a chicken thigh shaped tofu schnitzel. 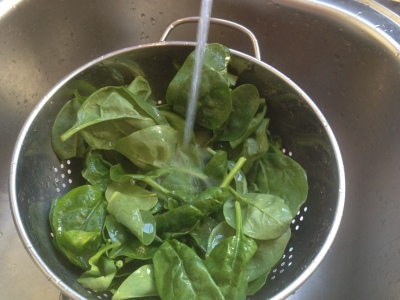 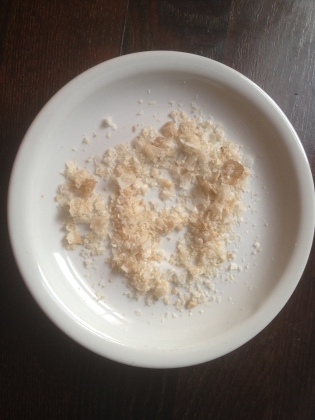 It’s not that I don’t like the halloumi, and the peppers, the onions, and the … sorry, no, the ready-made veggie burgers I really cannot abide. My point is that I believe there is a place and a time for vegetarian meals. Barbecues for me mean barely cooked red meat, fat dripping on the fire, hissing and releasing that irresistible smell that makes your stomach jump with excitement. Eating rich pork sausages while you wait for the really good stuff to get ready. Fresh fish just seasoned with salt, pepper and lemon, gently smoked. Ripping the meat off pork ribs with your bare teeth. Skewers of chicken hearts.  Not grilled halloumi. 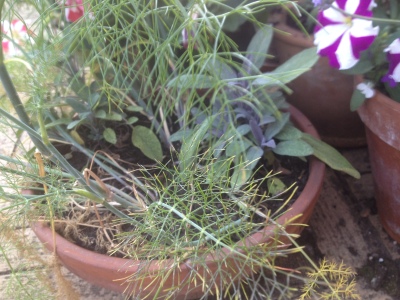 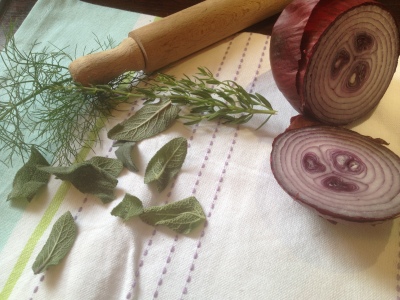 Checking the time and thinking up quick dinner ideas, I fantasised about sirloin. This is when I remember two facts:

1. The Resident Vegetarian had a work dinner that night.

2. I had no-one left to blame, and really was simply too lazy and too hot to start a barbecue just for myself. 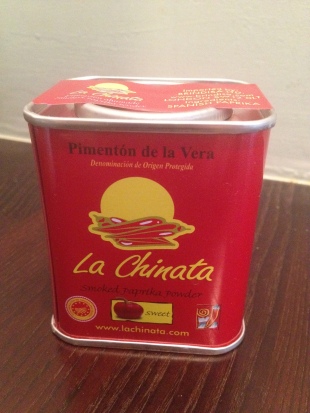 Looking at the red slices of chorizo at the deli counter, I thought they would be quite lovely fried with white fish. It would placate my craving for a smoky dinner. And the chorizo reminded me of one last important thing that day: sitting in my food bloggers’ weekend goodie bag was a tin of smoked paprika. I had been wondering how to use it. I grabbed the only decent fresh fish I could find at that time and went home to make cod, paprika, and whatever else I could find. Which was: some spinach, a bit of smoked bacon, and 3 (three) new potatoes. Hardly the stuff of dream banquets, but sometimes the lack of choice makes you use ingredients more wisely. To complete the smoky theme, I also found something else I had been meaning to try for a while, again buried in the goodie bag bounty: smoked salt. 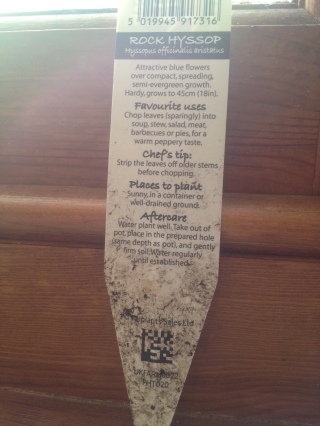 I have one question left after last week: how come I haven’t been cooking with smoked paprika all my life? It is wonderful! I am forever hooked. I used the same big frying pan 3 times, for the bacon, the spinach and the cod, making a point of not washing it in between to make the best of all the tastes. 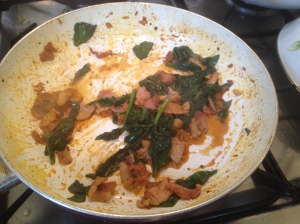 As for the potatoes, well, I wasn’t sure if I was meant to fondant new potatoes, but I thought I’d give it a go for the sake of experimentation. If nothing else, it would take no time at all to cook 3 small new potatoes. It did work rather well, actually, but they weren’t as pretty as perfectly cut proper fondant potatoes like King Edward or Maris Piper.  For flavour, I used sage, a tiny bit of fennel, and – God only knows how I had that – a herb called rock hyssop, which turned out to have a lovely spicy lemony taste. 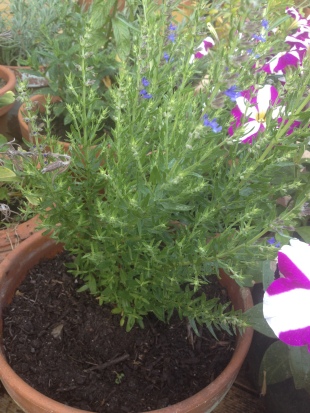 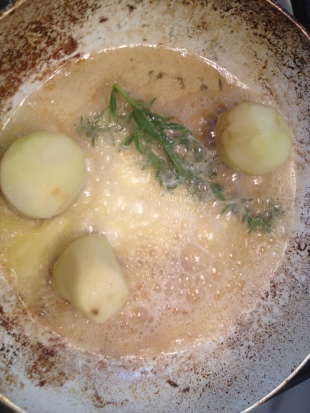 I started on a cold bottle of Portuguese vinho verde,  and by the 20 minutes it took to cook dinner, somehow the 1st glass had evaporated. It is shocking what the hot weather does to wine. Another 2 went with the fish.

I’m not sure if the photos do justice to the beauty that was this dish. A squeeze of lemon brought out the freshness of the fish and the spinach, and then with the first bite I got  a smoky punch of flavour. Three cheers for the latest ingredient to make it to my all-time favourites: paprika, you are my friend!

Fillet of cod with smoked paprika, spinach in bacon and fondant potatoes.

Start with the fondant potatoes: 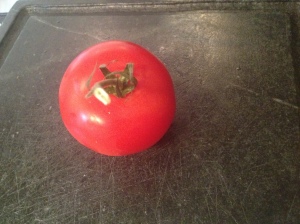 PS: in what seems to be a tradition with my cooking, I realised long after eating that one ingredient had been left out. I meant to chop a couple of tomatoes to eat as a fresh salad on the side. You may want to give that a try. 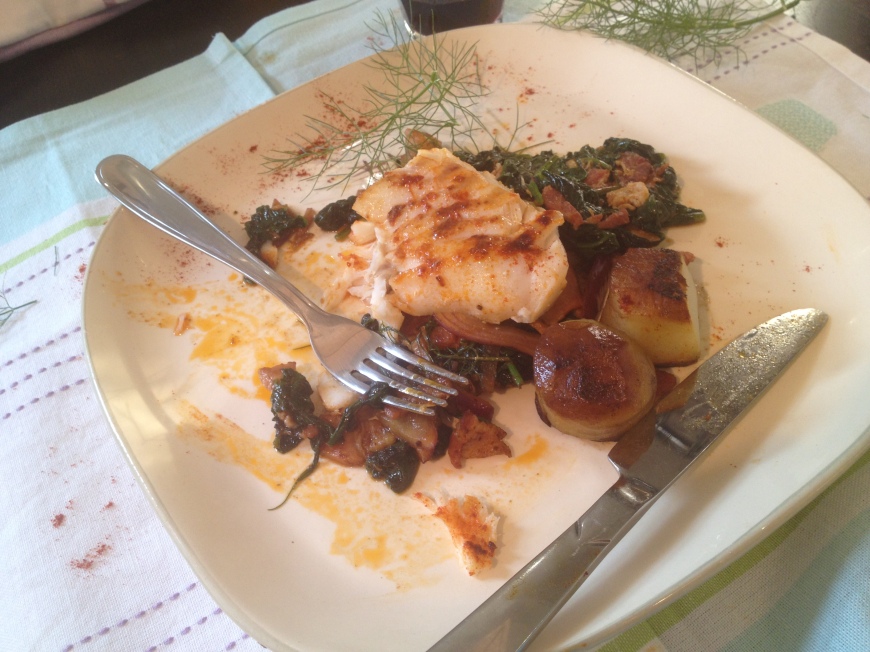